I’m going off the rail this week, but hey, it’s my blog, I can shake things up if I want to.  The events in the following story are all true.  Only the names of the innocent have been changed (except nobody in this account is innocent, so don’t worry about it). 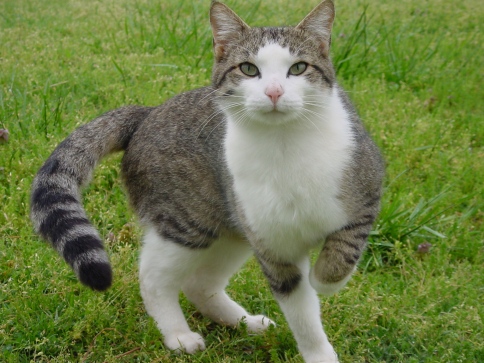 A lifetime ago in cat years, I heard plaintive mewing in the woods behind our house.  When I went to investigate, a gray and white kitten saw me coming and assumed I was hungry, so he dove into the center of the woodpile he’d been standing on.  I called to him for a little while, shrugged, and assumed he was hungry.

Instead of running back into the house to hide, however, I set out a bowl of scraps for him next to that woodpile.

The way to a kitten’s heart is through his stomach.  He adopted us, and we named him Woody.

Woody proved to be exceptionally intelligent.  For example, one evening I brought a batch of chicks home from the hatchery, made sure they got squared away safely in the stock tank we used as a brooder, closed the doors of our workshop, and went to bed.

The next morning I opened the workshop … and out walked Woody.  Yikes!  I’d accidentally locked him in overnight with a buffet of fluffy meatballs! 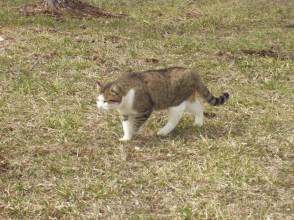 I’d already seen this cat use mouse tails to floss feathers out from between his teeth.  This was also the cat that left dead frogs on our porch to show how much he loved us.  My only hope was that there had been enough chicks in the tank that he decided to leave some for leftovers after he ate his fill.

But to my surprise and relief, not only were all the chicks there, nobody was experiencing post-traumatic stress.  For a minute I thought Woody might not have even realized they were there, but then I noticed something.

Against the wall of the tank there was a cat-sized depression in the shavings.  Woody had found a warm place to nap during the night.  I suppose counting chicks helped him to fall asleep.

Fast forward a few years.  Woody was middle-aged, and our younger son wanted a kitten. 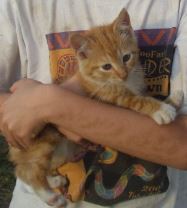 Toni loved Woody.  The feeling wasn’t mutual.  After the initial hissing and swatting, Woody then shrugged his shoulders and accepted that she lived here, too.  It’s possible he might have been able to take a liking to her, except….

Toni’s favorite game was Ambush.  One time Woody was walking by the car when she leaped out from underneath, tap danced on his noggin, and then shot off to vanish into the barn.

Woody wheezed and gasped and sputtered before he finally got out his hiss.

Despite his near occasions of heart attacks, Woody lived a long and full life.  The fact Toni grew out of ambushing him probably helped.  But eventually old age took Woody from us, and we agreed that the next time there was an opportunity to get a free kitten, we’d take it. 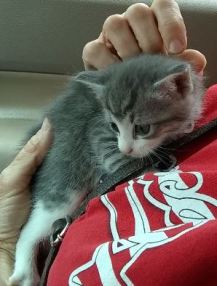 One of the reasons we selected him from that box of barely weaned sugar-pusses was because his color sort of reminded us of Woody.  And until he got big enough to move outside permanently, we used his alfresco excursions to introduce him to Toni.

Truman loves Toni.  The feeling isn’t mutual.  After the initial hissing and swatting, Toni stuck out her lower lip and accepted that he lives here, too.  It’s possible she might be able to take a liking to him, except….

Toni is old enough to qualify for the senior discount at the grocery store, but at least for nearly all her life she’s been accustomed to having another cat around.  We think Truman messes with her mind.  Sometimes she’ll run up to him and sniff noses … and then hiss.

She possibly thinks he’s Woody (they even look similar, for crying out loud!), but it might not be disappointment that hits her when she realizes he isn’t.

Sometimes we wonder if Toni suspects the day is coming that Woody will get his revenge through Truman.  That one day she’ll be minding her own business when he suddenly bounces off her brainpan and it takes her twenty seconds to get her hiss out. 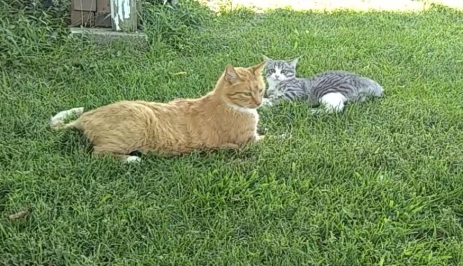 Oh, and in case you were wondering, I’ve never lost a chick to a cat.  It’s as though Woody took the time to instruct Toni that she can eat anything else she catches, but the chicks are off limits.  Hopefully his legacy will live on through Truman.  In a way it’s like he’s up there in cat heaven looking down on us, a hissin’ and a grinnin’ the entire time. 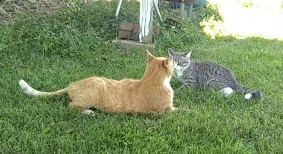 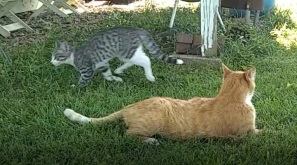