There is proof that God has a sense of humor:  He created turkeys.

When chicks that I’ve raised see a lawnmower in action for the first time, they run for cover.  When poults (that’s baby turkeys, folks) have their first mower experience, they run up to the closest fence and try to get a better look (They must be thinking Is that a turkey-mincing machine and how does it work?).

I try to keep the chickens and turkeys separate, even when I need to brood them at the same time.  One balmy day I set two wire enclosures beside each other, put food and water in each, then deposited the chicks in one pen and the poults in the other.  The turkeys ignored their own meal and kept trying to figure out how to get to the chicks’ grain (yeah, I know, there’s a saying that the only thing dumber than turkeys is the person who raises them).

Story characters can be turkeys in their own right.  In the midst of their written adventures, they can take on lives of their own and start doing things the author didn’t anticipate.  And in a way, writers are the gods of the worlds they created.  But when characters behave unexpectedly, we realize we’re not as in control as we thought we were.

And that’s a good thing. 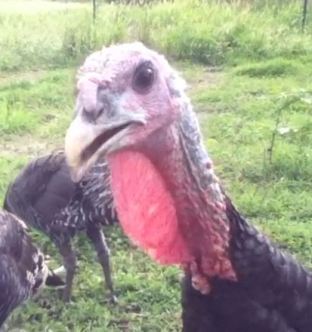 If your characters are so well developed their psychology shines through despite your other plans, you have characters that will live and breathe for the readers.  And a brilliant plot will fall flat if the readers don’t care what happens to the people (or animals or aliens, depending on the genre) impacted by its implications.

So the next time a character gets out of line, just pat yourself on the back and say, “I’m glad I have a sense of humor!”

2 thoughts on “Turkeys of a Lesser God”